AS MY BOYS BECOME MEN. The damaging effects of The Man Box and why I am parenting the hell out of it. 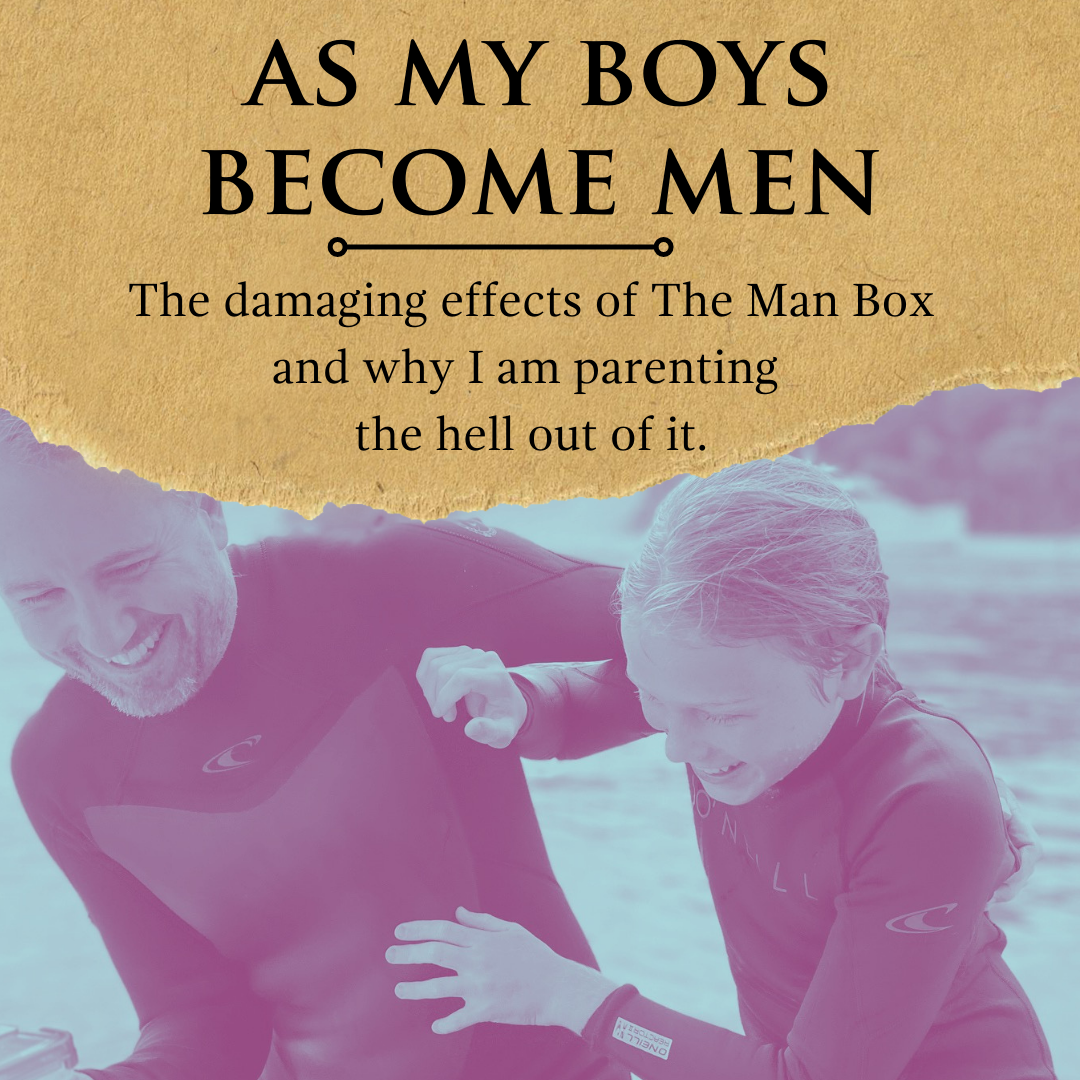 I have two sons aged 12 and 14. As with most siblings their personalities are very different. My eldest well into a season where hormones are messing with his IQ, sleep and sensibility. Peers are becoming his leading influence. This isn’t new or alarming. It’s normal, expected and important. We now as they grow, our kids must detach from us and progressively make their way into the worlds, as adults.

I can see my eldest son stuck between the alluring ease of boyhood and the hard pull forward to become a man. In times past and distant cultures he would have likely had some marked rights of passage experience. I have attempted a few things but to be honest, they didn’t work out as I hoped. In today’s society, father-son pilgrimages or tribes of elders performing sacred rituals is so abnormal that even if I wanted to do it and told my son it was important, the reluctance and pushback would be overwhelming because it would just so foreign.

Compared to other young men at 14, my son doesn’t live in a sheltered life. He attends a public school and is exposed to the realities of life in the Australian suburbs. He attends BJJ and a local church youth group, consumes media, loves Slurpees, cooking hamburgers, gaming and a good laugh. He’s had some mental health challenges, particularly around school but is progressively getting better. Psychologists have helped. Most parents of grade nines will attest to the rollercoaster it can be. The journey across the threshold that puberty hangs you over can be treacherous at times but I’m proud of the young man I see emerging. And I tell him that.

What does concern me, more than anything, is that my boys do not become prey to the kind of culture that demands men fit into and a particular box of values. The Man Box was a phrase coined by Tony Porter in response to research among men in the US conducted by Paul Kivel in the 1980s. I’ll spare you the history lesson but the findings sparked a string of projects and further research across continents (including US, UK, Mexico and Australia) where the primary question was “What does it mean to be a man?”. Today, The Man Box contains a seven main pillars. In short, these seven things dominate the conversation among young men on what makes ‘a real man’:

The guy who can tick every box, all the time, would be spoken about like this.

“This guy, doesn’t need anyone. Happy to help, but never asks for help. He’s tough as nails and always fights back. Even though he doesn’t spend much time on his looks, clothes and hair, he looks amazing. Guys wanna be him. Women want to be with him. Speaking of women, he doesn’t do any of that female stuff like cooking and cleaning or taking care of the kids. That’s the women’s job. His job is bring home the bacon. He’s not gay and kinda hates gays, actually. Before he was hitched and had kids, he sowed plenty of wild oats and never turned down the offer for sex with the ladies. I can’t remember how many fight stories he’s told – he nearly punched a guy on the job-site the other day and can’t stand it if his current partner is somewhere (or with someone) he doesn’t know about.”

Now, let me ask you something. How many movie characters are portrayed like this? Maybe we start with movies staring John Wayne, Clint Eastwood, Sean Connery, Bruce Willis, Vin Diesel…? How many men do you know feel the pressure to climb and keep themselves in this box. And even if they don’t want to, trust me, the culture has a way of pushing you into it. Here is what we know, NO MAN can tick all of the boxes and keep them ticked. Author and therapist Mark Greene explains “The Man Box culture is not designed to let men succeed. It is designed to keep men policing, and bullying, and ultimately, fearing each other… the man box cheats men, and everyone pays the price.” More than anything, seeing my sons avoid The Man Box is high on my parenting radar. My experience with the Man Box has been tangible and painful – and I know that I’m not alone.

Now, I am very aware that what I explain here may come across as excuse-making for the poor behaviour of men in society. I cannot control the lens through which you see me or read this, but it is not my intention to justify the damaging effects of toxic masculinity or damaging patriarchy. In fact, I would side with the growing academic research and those who have pointed out that unless the narrative around ‘What it means to be a man’ changes, men will continue to remain wounded and fractured – perpetuating systemic damage into the world. You see, the kind of wounding The Man Box culture creates is among the primary wounds in a young man’s life. If unaddressed and unhealed, the trauma stifles growth, maturity and a fulfilled sense of being. From this disadvantaged position, men have the potential for greater harm – to others and self… but we don’t need to be told that, do we?

How damaging is The Man Box? Here are some alarming statistics among men – many of which have correlations to The Man Box stereotypes.
31% of US men say they have experienced depression – much the same as women. However, men are 4 times more likely to commit suicide than women are (The Man Box demands men be self-sufficient and don’t seek help). Globally, of the 800,000 suicides per year, two-thirds are men.
Young men under 25 are 3 times more likely than young women to die of traffic related injury. (Agression, acting tough, drinking to cope).

Do these statistics translate to Australian males? In short, yes. This is straight from the JSS research finding website : “A young Australian men’s belief in rigid masculine stereotypes has a stronger impact on whether they will use violence, sexually harass women, or experience mental ill-health themselves, than other factors including their education levels, where they live or their cultural heritage.” Using The Man Box as a predictor of behaviour against other variables has shown to be:

These stats you just read are UNBELIEVABLY IMPORTANT. To translate, if a young man subscribes to The Man Box ideals because his mates, dad, heroes etc do, then regardless of his race, age, education, job, sexuality, location he is 25 times more likely to USE physical violence, sexual harassment, verbal bullying and cyber bullying. He is 22 times more likely to EXPERIENCE these things. 11 times more likely to drink in a very risky way (binging) and 10 times more likely to experience negative feelings and emotions (incl. suicidal). RED FLAG! RED FLAG!

We could talk about the high male representation in incarceration, addiction, violence and a lot more. Again, I know that much of the suffering in the world is at the hands of men but despite what some believe we’re not all hopeless assholes. As much as it pains some to read this, many men are suffering – most in silence. Many young men simply don’t know how to escape from the pressures of The Man Box and safely be someone else while remaining ‘a man’ (if that’s how they identify). It’s a crisis.

My dance with The Man Box has been felt deeply. The Man Box is really a young man’s game so I tapped out a few years ago. But for decades I struggled to tick some boxes. I was never the strongest or muscliest kid at school. I was the skinny white haired asthmatic kid with the arched back who listened to old music and kept to myself. I never won at sports. Talked my way out of most fights. Didn’t kiss a girl till I was 16. Smoked my dad’s cigarettes with my Jewish neighbour at 13 but never never in front of others. I’ve had my share of school and work bullies. I secretly cried for the Indian boy in 8th grade who was picked on profusely but I couldn’t speak up for him. I spent the weekends working with my dad at trash and treasure markets. I have served in voluntary positions for most of my life. I was married at 19. My wife is the only person I’ve been with sexually. I ran non-for-profits. I have lived for years of the generosity of others. I help around the house. I take fatherhood seriously. I have been once. Drinking alcohol makes me ill and drunk people make me nervous. I champion women and a lot of feminist dialogue. I have been shouted at from the pews for preaching God had a feminine side – and now I publish and preach poetry. I hardly have a single Man Box story of my own – I can only speak of being disadvantaged by it.

Men like the one I described earlier have been plentiful and I felt inferior, intimidated and uncomfortable around them for most of my teens, twenties and thirties. But here’s what I’m seeing – that being outside of The Man Box is a far better places to live. Research supports this too* And this, again, is why I want to parent the hell out of it in my boys. How am I doing this? Well firstly, I become aware of it in my own life. I look to see where I am applying pressure on myself and projecting that onto my boy. It’s very pervasive so despite my personal lack of Man Box ticks, it still has a way of sneaking in unconsciously. Secondly, I talk about it here are there. I tell stories of my youth. I selectively discuss (not lecture) what The Man Box pillars are. Thirdly, Nat and I pull my boys up on the language they use to describe others e.g. you’re gay, he’s gay, that’s gay. Fourthly, we monitor (where possible) the kind of media they consume. Lastly, we discuss the dynamics they have with friends.

I’m early into the fight against The Man Box so perhaps my approach doesn’t work – but at least I can be intentional and empower my sons to see The Man Box for what it is… a destructive universal force.