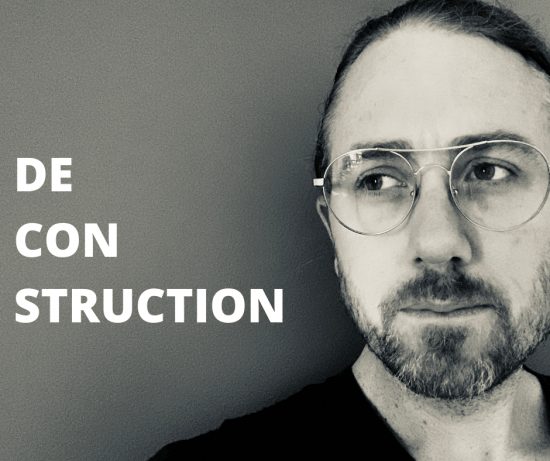 The deconstruction of a person’s faith seems to have gained popularity over the past few years. From my view, increasingly more podcasts, books, courses and articles seem to be made and released every year. Heck, I’ve mentioned it a few times. Deconstruction seems to be a term many are adopting for an event or season in someone’s spiritual and religious life where they make significant changes in beliefs, commitments and expression. It’s also a term fraught with fear and alarm for many.  In this article I touch on what I think genuine deconstruction may look like. I suggest it is necessary for maturity and not a new concept. I argue it’s best viewed through the lens of a development stage. I also touch on some things I believe deconstruction is not.

I think what makes the word deconstruction so alarming and inviting is that it strikes as a kind of powerful personal season. One where you are in control, or trying to gain control. If we were to be true to the word from a theoretical perspective, deconstruction actually means to break something down, analyse it, discover true or hidden meanings.

Three quick deconstruction examples to demonstrate: A feminist may deconstruct an old novel in order to reveal it is really a story of the oppression of women in the 18th century. Or, a philosopher may deconstruct the fairytale of Hansel and Gretel and discover that the children went astray and were hungry because of systemic poverty, a dysfunctional marriage, neglectful parenting – discovering that killing the occasional witch doesn’t address the familial or societal problems but this mentality is a reflection of the scapegoat mechanism often used in politics and religion (Jezebel spirit, anyone?). Or, we may take a deconstructionist approach to recent racial accusations, discovering along the way that we ourselves have been supporting it, without even knowing it.  These just a few examples of this concept, but I hope that makes some sense.

If you’ve read my last book, ‘The Wrestle’ you will have discovered that I had a breakdown of sorts a few years back, physically and emotionally speaking. But the truth is, I began to question and analyse my faith and religious journey in 2011 when my group identity took a big hit and I was fired from a prominent voluntary position at a church I was serving in. A position that I had worked hard for. One that I was very attached to. One I felt called too. One that I identified very very closely with. Now, I may have left that congregation and movement (which I did), but for me, I had around 15 years of Christian experience in the bank at that point. Some of it, very precious and meaningful. Some of it below average. Nonetheless, for me the path forward included finding other places of faith where my questioning was welcome, allowing me to validate and consolidate some traumatic experiences. It gave me the tools and permission to turn inward to see what roles I played in the perceived crisis. For me, this was an Elijah House Inner Healing training school.

Unfortunately, some people are too quick to label anyone in a season of genuine deconstruction as perhaps disillusioned, dangerous, deceived, daring or most enlightened. In fact, at these points of crisis, I think we have a few options.  But before I dive into the options, for context, let me write a simple paragraph outlining what I think too many modern conversations around deconstruction miss. And that is the longstanding (not new) theory of developmental stages which are akin to many of life’s cycle such as Christ’s life, death and resurrection. The four weather seasons. St. John of the Cross’ dark night. Campbell’s Hero’s Journey. Lewin’s change theory. You get the picture. A winter/death/dark night/dragon/unfreezing must occur if transformation is to take place.

The analogy of our faith-life with God being a journey is good, but one has to ask where the destination is, what stops are necessary, and what terrain is common or unique to each of us.  Instead, I think the idea of stages and maturity works best from a scriptural and social science perspective.  In their book The Critical Journey, Hagberg and Guelich takes Fowler’s Stages of Faith (based off Erikson’s development work) and suggest a journey made up of 6 stages. The first three stages involve us (1) discovering God (think: infant in awe), (2) entering the life of discipleship (think: attached toddler), and (3) the involved in the life of service (think: child helping with chores).  These can be designed and prescribed. Most of us can identify these first three stages within the Christian Church context. This is where much ‘construction’ happens. The last three stages of faith according to Hagberg and Guelich are not prescribed. They are (4) the inward journey (think differentiating & enlightened teen) which is marked by conflict, crisis and a battle of wills, (5) the outward journey (think sacrificial, healthy parenting), (6) the life of love (think mature wise elders in community). I have a 20 minute overview video of it here if you want to know more

Before I attempt to say what genuine (and helpful) deconstruction is, we need to know, it is not the following:

I know for some, at a point of crisis, they may simply walk away from the whole lot. God, the Church, Religion etc. To be fair, they probably aren’t deconstructing, they are demolishing. They are like the angry teen who suddenly walks out the door, never to return. Very little or no analysis or reflection. No dialogue. No help. No interest in a future with the past. Just them, walking towards the camera with a Hollywood style explosion in the background.

Equally, denial and devoid stages should be noted:

Because trauma affects us all differently and some people are very skilled at denying anything is wrong internally or externally, they simply employ their denial, perhaps scapegoat someone/something and carry on like it’s all good.  Very often, these people get stuck in stages 2 or 3 of the developmental journey. Or, they are actually in stage 4, at the wall, but are using denial as a tool to pretend everything is OK. I can’t help but think of the Monty Python parody where the knight who has lost both arms in a sword fight calls it a ‘flesh wound’. You’re bleeding out, bro!

I have honestly met a small number of people that have just breezed through everything in life and faith rather brilliantly and remarkably. They seem to move through deconstruction and crisis stages fairly quickly and silently- devoid of drama, fallout or high cost. Their lives may be marked with loss but somehow they found a way to make sense of it all or at least leave much of it to mystery. In many cases, these people have had a good formative experience growing up, aren’t particularly sensitive or highly empathetic people. They generally have had good attachment experiences growing up – and genuinely move through the inward journey and onward with little effort or noise.  These people are pretty accepting of others, don’t hold much judgement and are often secure in themselves.  In most cases, they are marked by genuine joy that came with a deep sense of belonging from homes where parents had done their own maturity work. But again, these people are very, very rare.

With all that in mind, I think a well framed question may now be: What are the options for someone who has gone through the first three stages, spent many years in faith communities, only to find themselves in a developmental crisis of sorts? They refuse to deny or demolish. They are committed to moving forward and maturing.

I’m going to stick with the teen analogy. Some may disagree or hate this, but I think it’s helpful. I’ve been a teen. I have two children in their teens. Let’s first identify two essential elements to this scenario. (i) Something has been constructed to deconstruct, and (ii) there is a crisis of sorts. This crisis can be a myriad of things including moral, sexual, racial, spiritual, organisational, relational to name a few. In fact, it may not be a crisis with the church – but a maybe a belief or worldview conflict of sorts. e.g. death of someone close who God did not heal, in a faith construct (like Pentecostalism) that believes in, and sometimes sees, divine healing. Or, a person identifies as gay, but realises integrating the Christian and gay identity is very challenging.

During the deconstruction stage, personal identity (who am I) and group identity (who are my tribe) are working together simultaneously and often are conflicting. Interestingly, we see many people find themselves in the deconstruction phase in their late 20s and early 30s as their group identity shifts, even neurologically, and they begin to see the tribe they drew their sense of belonging from in a different way. Often then, crisis comes to them directly or occurs around them and they need to make sense of. it. They need to make a way forward. The person is beginning to ask big questions, particularly about things they took for granted or things they were told by those they once believed and followed. Often behind the energy to seperate from what was constructed is a desire to carve something out of their own, apart from the tribe and authority. So, they often question authority (people and principals). They test boundaries. Perhaps they work fiercely to differentiate from authority (parents/church/theology) that they perceive as dogmatic and controlling (which they may have been). What they crave is something to kick against in a safe and inviting space to do that in. If they can’t find that in the faith community, (think: teen in home), with authority figures who are safe, loving, patient and can regulate themselves, they will find a tribe of peers to move forward with. Often, those in deconstruction don’t want to be defined (like some may think I may be doing here) and/or told what to do. Whatever the case is, this is where they are.  In a stage of deconstruction. And this stage, may take many years and a whole lot of healing.

As a final note to the above, I believe we have all met people who are living their adult lives like teenagers. It’s like they got stuck. This is often marked by selfishness , immaturity, recklessness and thoughtless rebellion fueled by unresolved pain and trauma. Almost opposite, people can also be stuck in their teens through thoughtless compliance and religious pride which is fueled by unexamined fear.  And that is what it is, tragically. I do think, however, when this stuckness is translated into the faith/spirituality/church arena, where they hold a stage and wrap their identity around either ‘the eternally wounded deconstructionist’ or ‘the eternally compliant good saint’, those seeking direction and guidance need to follow with caution. Why? Because if deconstruction is a natural and necessary stage in our spiritual development. (which I would argue it is) we need to know that the next stage is a reconstruction of sorts. In other words, we have to move on and continue maturing. After all, the world desperately needs more wise, safe, healing elders.