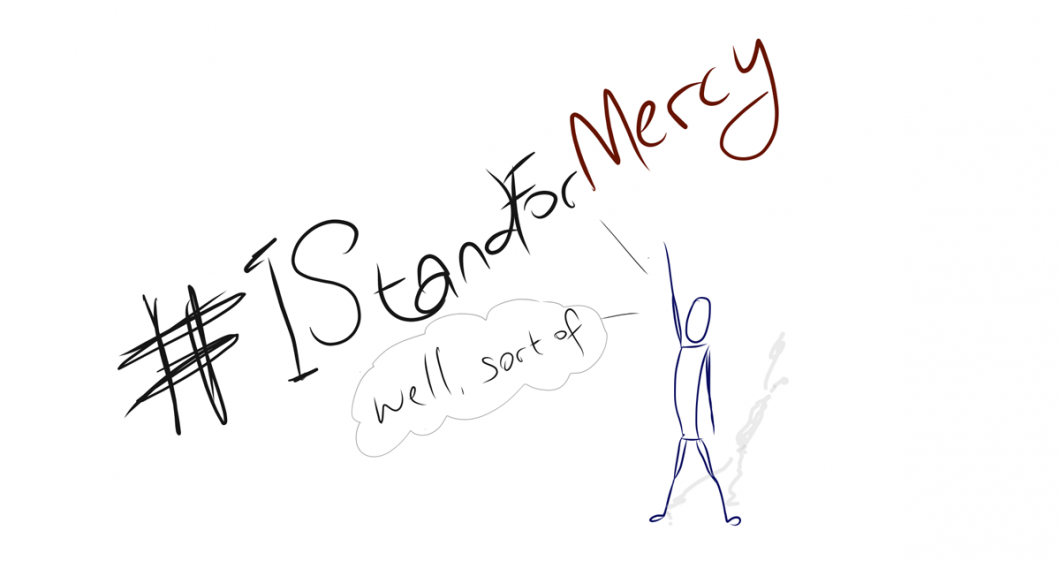 In the early hours of this morning. Several thousand kilometres from where I live, two Australian men were intentionally murdered by firing squad in Bali, Indonesia.

My social media feed filled up with heartfelt posts, thoughts, paintings and links to articles on Andrew Chan & Myuran Sukumaran – and their respected families.

In a similar fashion to the #I’llRideWithYou hashtag we saw last December, the #IStandForMercy hashtag is trending strongly on social media along with some strong comments and open thoughts on justice and mercy – including many from my Christ-following friends. And may I just say, from the onset, that I do not stand for justice through death penalty.

Within the Andrew and Myuran story is a fascinating narrative of redemption. Several years ago, these gentlemen were not given much attention or public support because to many, they were guilty and foolish drug smugglers – ‘absolute scum’ to those who have lost loved ones to heroin drug addictions. But today, to many Australians, they didn’t die as drug smugglers, they died as a Pastor and a Painter. They didn’t die as contributors to a death-ridden drug trade, they died as two unjustly treated Aussies who deserved to live.

In contrast, to Indonesian officials, as we have seen demonstrated, their sense of justice and fairness was reflected in their actions to go ahead with the death sentence. A lesson on perspective and the power of founding religious-driven ideals I think Australia should remind itself of.

But if you’ll follow me beyond today’s traumatic event, into next week, next month or next year, when the topic wanes, the media frenzy moves on and our thoughts move to the next event and trending hashtag, will you stand for mercy? Do you really stand for mercy?

To the Christian reader, let’s move things a little closer to the steeple shall we? Do you stand for mercy in your own church? Towards your brothers and sisters in Christ? How about your church leadership and pastors?

Again, hear my heart – those of you who know me personally and the message I stand for, you’ll know that I have a great burden for those who’ve been wounded in the Church to have their hearts back. My soul is stirred and grieved for the many that have stood before the metaphoric firing squad of other believers and been unjustly treated, persecuted and thrown to the lions.

Whether we are shot by leadership or in leadership, should mercy still prevail? What is unforgivable? What of justice?

What must the pastor who was labelled as a ’thief’, ‘bully’ or ‘bastard’ do to redeem himself? How can he go from drug smuggler to pastor or painter? What would it take, in your eyes, for that Sunday musician or church member to redeem herself and identity in your eyes? What will it take for those of you reading who were wounded, shame-labelled and de-valued in fellowship, to be restored to faith in Yahweh as the ‘God of community and family’?

I think if we were all honest with ourselves, and this includes me, we don’t really StandForMercy. We stand for our own sense of fairness. We want to bless, but cursing feels better and comes easier. We want to forgive but resentment seems to empower us more and motivate stronger.

Herein lies such a deep seated aspect to our lives that Jesus seems to continually address in His Sermon on the Mount (Matt5-7). It would seem that the God He claims to represent is not after simple behavioural change and new learnt responses. He’s after absolute surrender to His Kingdom values along with a genuine, matching heart responses.

May we remember that peace, forgiveness, justice and mercy are only powerful weapons in our hands if our hearts first rest in absolute abandonment to God and His ways.

Again, let me finish by saying that judging according to our own righteous ideals, although common, can be so dangerous. May those of us, whose response to today’s event is hate and anger, find it in our hearts to forgive the Indonesian government for their actions. And may true agape love, and not resentment, be the driving force behind our actions and responses – both with those who are oceans away… and especially towards those closest to us. May we all endeavour to #StandForGodsMercyAndJustice