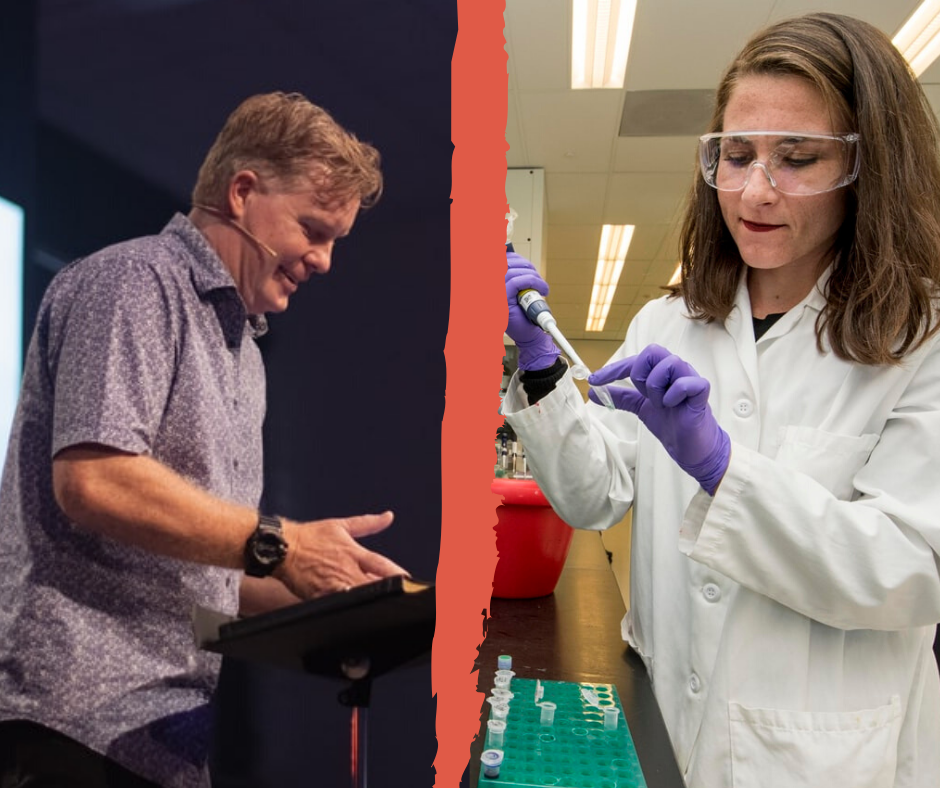 So, if you’re reading this, there is a chance you’re a Christian. There is also a high probability you are of the Evangelical Christian variety (BTW, that does include most Pentecostals and Charismatics, Baptists and non-denominational). It’s a fairly safe assumption because they are the largest religious group in the US [1], and Australia. Welcome.

If you are Evangelical, research suggests it is also likely that you don’t trust scientists, particularly University Scientists. You also don’t trust Industry Scientist such as pharmaceuticals (ironically, most of us would be dead or very ill without it. Paracetamol, antibiotic or insulin anyone?). Oh, and you’re probably not much of fan of Science Museums. What is also interesting is, that as an Evangelical, as your own knowledge of science increases, your trust of University Scientists decreases [1].

If you want to know who/what non-Evangelicals trust – you can just flip this. It’s almost the opposite. e.g. The more one learns about science, the more they trust the University Scientists who study science, teach it and advise on it in, say, a national addresses regarding the best course of action during a pandemic which they’ve likely studied over thousands of hours.

By the way, all these stats are from a study conducted in 2018 across about 6,500 participants in the US [1]. The authors do note that not all Christians are anti-science. When it comes to creationism, one author [2] argues that Christians are not against science but take things case-by-case and are more concerned about the anti-Christian philosophy of science some like Richard Dawkins and Lawrence Krauss have espoused. It’s also noted that the younger generation of Evangelicals are less against University Scientists too.

We probably should be aware that generally, Evangelicals consume different media than non-evangelicals. An interesting study paper titled ‘Red media, Blue media’ [3] suggests that ‘conservatives and Republicans preferred to read news reports attributed to Fox News and to avoid news from CNN and NPR.’ Democrats and liberals did the opposite. While we are on the political topic, other studies confirmed that conservatives were more trusting of religious organizations than other authorities [1].

So, my question is, why do so many good-hearted, bend-over-backwards, salt-of-the-earth Evangelicals have a distrust for authority, particularly scientific authority? Why is there is a common bias towards consuming and sharing media that pushes against the scientific community (e.g. the recent viral Plandemic video)? Where does the swing towards conspiracy come from? Surely, it’s not all conscientious click-consume-share behaviour!?

Well, the answer is slightly complex, but it comes down to trust. And there are two kinds of trust here. One is based on ‘ability’ aspects and the other is based on ‘social-relational’ aspects [4]. When given the choice between the two, by default, most humans choose the social-relational trust over the ability aspect. Translated: when there are conflicting views, most Evangelicals will trust the religious leader(s) they have a social connection to, over the ability of someone who has spent at least 6 years of really hard work, studying full-time for a PhD.

Yes, studies show that Evangelicals are more trusting of religious organisations (church, ministries, popular teachers) than scientific authorities [1]. But this is an older tendency than most realise. You see, Evangelicals (which I can identify with) are from the Protestant stream of Christianity which emerged about 500 years ago with the famous reformers Martin Luther and John Calvin. These gentlemen, (and others) argued a philosophy of sola scriptura, basically suggesting the literal words printed in the canonized bible was the divine authority and should be given to the people. Before this, the church authority held and read the scriptures, and generally interpreted it allegorically thanks to their education and training.

These protesting reformers pushed against the allegedly corrupt church (read: authority) of the day and with the help of the printing press, started a religious movement that didn’t need to rely on the governing authority for truth, but instead empowered people to read and interpret the bible for themselves, literally. And this literal interpretation, would establish a trustworthy source of truth and authority. It’s why, in so many churches today, despite John’s gospel opening with declaring Jesus as the Word of God, we hear the scriptures referred to as the Word of God – signaling its divine authority.

So, imagine being born (or born-again) into a tribe of people who, in their historic bloodline, have a distrust for authority and those who want to tell them ‘a truth’. Imagine the person who graces a microphone at your gathering opens a book, declares it is without error and although they share their interpretation of it (bias included), they encourage you to read it for yourself. Imagine also a tribe who publicly declare that this book (and their interpretation) is the only source of truth out there. You may even imagine that the stakes of getting the religious rules right and placing your trust in the right place is a matter of eternal life or death. Oh, and those who are not for you, are obviously against you – including scientists. If this were the case, who would you choose? Of course, the pastor, priest or rabbi is the trustworthy source! (Pastors reading this, you need to be aware how much trust people place in you beyond bible knowledge and pastoral care – even if you don’t want it, people are placing trust in you.)

There is another facet worth considering, and that is a theory called motivated reasoning. We all (me included) have a tendency towards consuming information that fits with our prior belief and experiences [5]. If you have reason to doubt news sources based on beliefs, you will most like dismiss it or even fight against it to avoid the work of consideration and change. If you believe the bible is the final authority on all things, and educated authorities (like University Scientist) have presented information that doesn’t fit with your or Ken Ham’s, or James Dobson’s, or your favourite Prophet’s view on things, then why not protest against them? I mean, your movement is based on this kind of protest, right? Even though we seemed to have modified the pronunciation by making sound softer, where do you think the word PROTESTant comes from. Yes, a protest against authority.

I’d like to say to all my brothers and sisters who are reading this and unsure of how someone can have thoughts or their own outside of their church, I get it. A lot of people don’t know how complex being part of a faith community can be. Learning new things, or holding conflicting views in tension takes training, maturity and mental effort. It also takes a someone who will give you permission to even raise questions and not agree. I’ve lost count of the number of Christians I’ve cried and grieved with over the years who were nudged and shamed out of a faith community because they disagreed – or themselves didn’t feel they could safely stay. I mean, who wants to be excluded from a tribe/family/faith group? It’s terribly painful. As I recall hearing once, ‘church groups are easy to get into, and hard to get out of’.

So. if you have read this far (congrats), I’d like to speak very candidly about a few things. I’ve referenced all previous thoughts (see below) – they are largely not mine – I’ve just collated them based on own limited research. Take my personal thoughts here as you will. I don’t mean to offend, but I don’t mind challenging.

Firstly, I am concerned by well-meaning Christian friends who get caught up in the group-think protest against authority and share copious amounts of unresearched, unverifiable conspiracy-flavoured material on social media. I’m partly concerned that if you want to be a good witness to non-Christians, you have to understand this: it looks rather stupid. If you must post and share, consider doing your own research by reading scientific articles via Google scholar or something similar. If it seems legit, post it along something opposing or a disclaimer of ‘this is interesting, what do you think?’ Trust me, it’ll take some time – but you’ll learn and grow.

Secondly, understand that science and religion can coexist. They have before. They don’t have to be in opposites. There is plenty of reading material on this also. There are well meaning, Jesus loving people in all spheres of science and academia. Good-hearted moral, ethical, scrutinised people. I should also add to this, if one is really against science and its trimmings, they should cut all ties with technology, medication, mechanics. Basically, you should go off the grid and live self-sustainably somewhere. If you read your bible on your phone, and watch church services via livestream, you have just witnessed the coexisting of religion and science.

Thirdly, give your pastor, priest, rabbi a break from all your trust. This may not be possible for early/new Christians, but should be a result of spiritual growth and maturity.

Fourthly, you have full permission trust or distrust anyone you like. Not every person or every organisation is moral or ethical. Present company included. Be aware of your bias and be quick to fess up when challenged. Understand this, when in discussion about something, personal attacks or ‘everyone knows’ or ‘obviously’ statements signal a lack of critical thought on the topic. (I have a bias to avoid these conversations.). Just leave the discussion alone.

Finally, and this is more of an observation, I think something very interesting is happening. Research is suggesting that younger generations (Gen Z), including Evangelicals, are leaning more towards trust in science [1]. Historian Phyllis Tickle noted that the church seems to have a revolution every 500 years [6]. During these turning points, the driving question is, ‘who is the authority?’. It is now 500 years since the last reformation. Sola Scriptura was the answer to the authority of the day. Since then, around 9,000 denominations have emerged from Protestantism alone. Many with differing interpretations. Most claiming authority on their interpretation of scripture. The emerging generations and a number of forerunners are deeply aware of these factions. It seems like the authority went from the church of the day (Roman), to the scriptures and somehow moved back to the church. Perhaps sola scriptura has run its course as the leading authority. Sad news for some. Relief for others. This much we know, as with all turning points in the church, technological advancement played a larger catalyst than many religious folk gave credit [6]. In the coming church age, I have to wonder where the authority will lie. I do not think it is science and its growing body of literature; but I do think the sciences will have a large seat at the formation table.