Why being STEPPED DOWN from leadership makes little sense to me 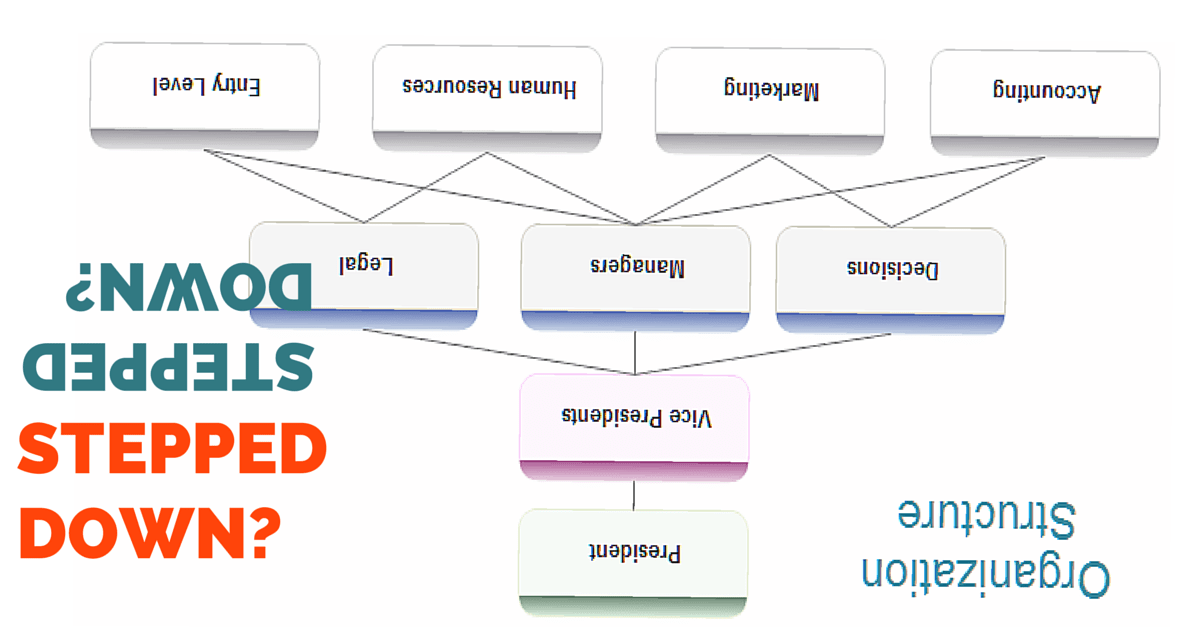 “Did you hear about such-and-such? He was stepped down from his leadership position”
“I heard he wasn’t cutting it so the Senior Pastor and eldership stepped him down”

Confession time: I have used these phrases numerous times over the last couple of decades. But I think I’ll stop for a while. The idea of stepping DOWN from leadership increasingly makes little sense to me.  Unless of course we consider leadership an ELEVATED position. A HIGHER-than-others role.  A TOP title or position. A TOP DOWN authoritative model.

Words frame our world. They give weight to our circumstance and alter our perspective.  I’ve been around organizational life and leadership for long enough to know there is a hierarchy model that has it’s own definitive language.  Look at any company structure diagram and you’ll see the boxes get fewer at the top until you see the title CEO or something similar. There is often person ‘at the top’ who ‘stepped up’ into leadership.

I’ve been ‘stepped down’ from leadership a few times.  Sometimes it was heartbreaking and made me question myself. Other times it was a relief and I felt I had some of myself back.  Every circumstance and response is different, because everyone is different.

So why do I have a problem with the “stepping down” terminology,  especially in Kingdom culture?  As I read the Gospels and parts of the epistles, I am seeing more and more that the type of leadership Jesus demonstrated was the servant-leader model. More than that, He spoke (and still speaks) in terms of family.

When you become a mum or dad, you are basically required to humble yourself, die to yourself, serve the needs of another with love and patience.  Any new mum will tell you the absolute life-changing months/years that follow the birth of the first child – life is never the same and tell me, does it feel like a promotion? Like you are better, stronger or more powerful than ever? Ummm, NO. ‘As the mum of a 1 month old, I am stronger, more powerful and confident than ever’…said no mother ever!

See, I don’t think you step UP into leadership, I believe paradoxically you step DOWN into it.  When Peter was asked to walk on water, he stepped DOWN out of the boat, then nearly sank (Mtt14). Yay leadership!  Philippians 2 tells us of Christ’s approach and example on earth – that as He was brought low before men, making Himself nothing, He was exalted by God. But, as we know, it took Him to the cross. Yay leadership!  Joseph had his pits and prisons. David had his sheep and shame.

If heaven had a leadership structure diagram, my guess is, it would be inverted. With masses at the top of the chart, under-girded and being supported by fewer (namely, God), much like a family. My kids sit on my lap and on my shoulders, not the other way around.  Perhaps it’s why St. Paul uses the language of foundations when we wrote: ‘Together, we are his house, built on the foundation of the apostles and the prophets. And the cornerstone is Christ Jesus himself.’ Eph 2:20

Kids sit on their parent’s lap and stand on their shoulders, not the other way around.

So to those who have been disappointed in being “stepped down” from leadership, let me bless you with knowing that you may in fact have been stepped UP from leadership.  I also want to bless you with knowing that an office or title is always secondary to the call on your life, which is not established in the hearts of men, but the heart of God. More than that, it pays to remember that in your Father’s eyes, you will always hold the most prestigious title in all the earth, You are His child!  1Jn3.1