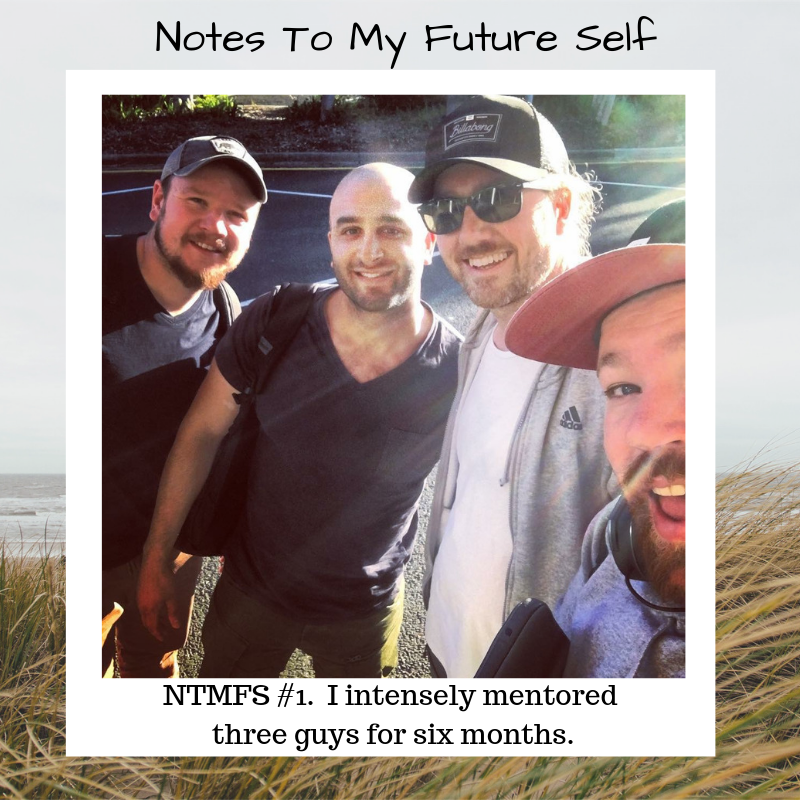 Preface: Reflecting on 2018, I’m recalling 7 things that made a big difference this year. I’m writing as a note to my future self – but they might be of help to you too.

In Dec 2017 I personally offered mentorship to six guys in their 20s and 30s for a six month period. After a month, three guys remained. It was transformative and rewarding for all us.

The Why
In the last months of 2017 a personal crisis beckoned me to reconsider what on earth I was here for. I was aware I was going to turn 40 in 2018 and this deep concept of legacy began to grip my heart. I’ve spent years teaching and travelling to the masses. Which is fine, but you are spread thin and it’s hard to generate momentum for personal transformation from a pulpit a few times per year. Why? Because transformation best happens through constant conversation and intimate relationship.

I didn’t have an agenda for some kind of return or retainment from these men. I believe in the apostolic value of Investing to release – not investing for a return or retainment. So, there was no charge and it was a six-month commitment from me to them. Basically, I wanted to see these guys grow and be strengthened.

The How
When we started, four of the guys were interstate, the other two were overseas. I needed to leverage some tech that allowed ease of communication whilst remaining flexible about response time. Preferably something video based for the face-to-face feeling. So we used a smartphone app called Marco Polo which is a video-based walkie-talkie thing. It was perfect for busy working guys because you only watched and responded to the videos in the group when you could / wanted to. Many of us did it during our commute too and from work (handsfree, of course 😉 ). It was really effective. It allowed for an ongoing group chat and individual discussion too.

At the end of the six months, we all met at a central location and hung out for a couple of days. We talked, ate, went for walks, laughed, relaxed, played cards and video games. It was awesome.

The Value
I know the bible says “Go and make disciples of all men”, but let’s cut the crap, hardly anyone is doing it out of their own conviction because it’s tough, time-consuming work. I’m not saying it’s not rewarding – I’m saying aside from church-led programs, not many men are motivated to mentor/father/or disciple other men in an intentional way. Plus, if you have a family and are working like I am, you are time poor and your family is (or should be) your discipleship group and time priority.

But, if you want to have genuine impact on your world, you can’t beat intentional mentoring/discipleship. I dare say that six months together changed the course of our lives. If you feel led to it, you should.

The Outcome
I have to put this down to divine leading: after six months, we talked about continuing journeying together but we all got very busy. Basically, the grace was not there – not because of crisis, but because of promotions, babies, ministry offers, moving, business opportunities etc.

None of us were friends before we started. These young men were just guys I’ve met in my travels over the years and I felt God highlight them. It was a risk to invite them – firstly, I had to come to grips that I had something to offer that these guys wanted. I’m not a tribal elder. I’m a parent. I’m just a man at midlife trying his best to leave a legacy. I know that I’m knowledgeable, can facilitate healing and can teach; but a six-month mentoring intensive was a new concept to me.

As I mentioned, half of the six didn’t engage in the journey. I was peace with this. I may not be the sort of guy they want to emulate. They may be too busy. The vulnerability I modelled may have been too intense. The tech may have frustrated them. They may have had other men mentoring them… whatever the meaning, only three remained. From the Gospels, we know that Jesus had Peter, James and John as the three men who journeyed closest to him. I used to think that was because Jesus chose them. But I now think, they were closest because they chose Him. They turned up, pressed in, risked vulnerability and valued.

Was it worth it? Yes. It was very rewarding for me and the three guys that took up the offer. How do I know? Because at the end and throughout the six months, we all verbalised gratitude for it.

Note to my future self:
Dave, you ask good questions and can facilitate discussion. You don’t have to have answers or be the answer. Just be a safe and compassionate witness. Love people by giving them the time, respect, dignity and attention you have – and let God do the deep work. Remember, you managed to make a difference in the midst of a huge personal transition if God prompts you to do it again, consider it.

Other Notes to My Future Self