Reducing Church-based Trauma. Should we start with the Ministry Workers? 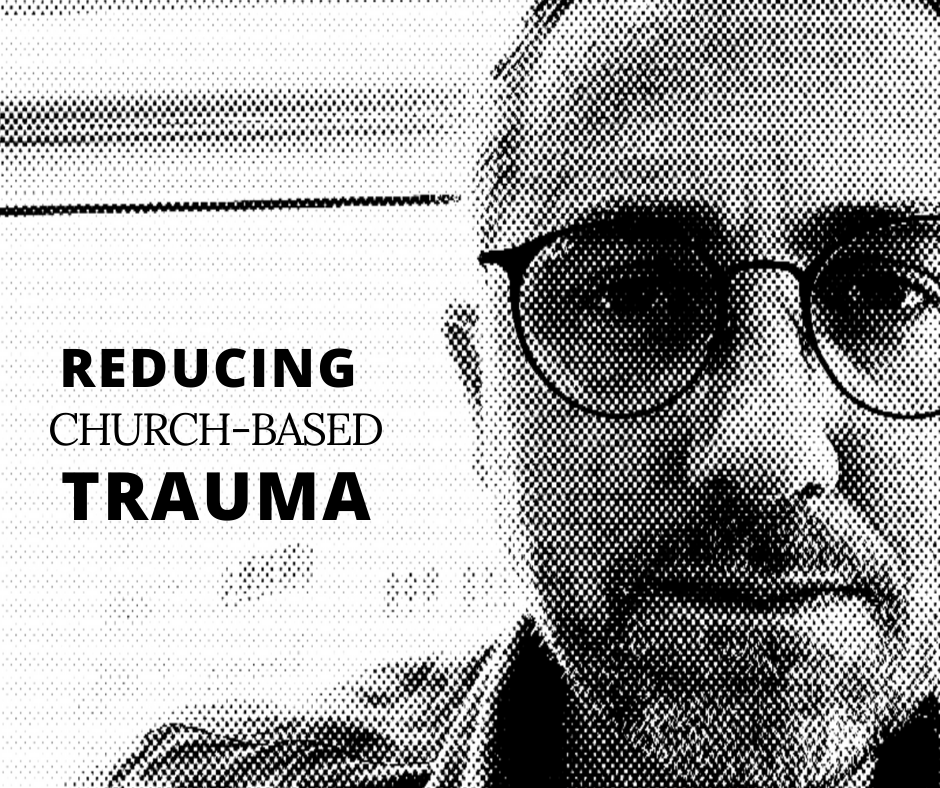 In 2011, researcher Marlene Winell coined the phrase Religious Trauma Syndrome (RTS) in an effort to define the set of symptoms found in those who ‘participated in or left behind authoritarian, dogmatic, and controlling religious groups and belief systems.’

Symptoms in those suffering with RTS range in severity. Areas of the person’s psychological response effected by RTS include cognitive, functional, affective, social/cultural and developmental (delay). It is suggested that RTS develops in toxic religious environments where two basic narratives are communicated: “You are not okay” and “You are not safe.”. If you’ve been around varied presentations of the Christian message, you may agree there are plenty of doctrines that reinforce these two messages, including; original sin, eternal damnation, retributive wrathful judgement , end-time views, demon possession and gender/hierarchal/racial submission to name a few. You may also be aware of the ecclesiastical authority styles birthed from and supported by these doctrines.

Although some in the psychology community believe RTS can be encompassed by the term post-traumatic stress disorder (PTSD), I would agree with those who believe that although this may be the case, it’s important for people-groups to have definitions like RTS to give honour to their sufferings relevant to their origins and identity. A quick web search on Religious Trauma Syndrome will return some helpful information including a Wikipedia page with plenty of academic referencing for those interested in digging deeper. As troubling as RTS is, we know that this is only one kind of abuse someone may suffer in a religious/church environment. History and current news is replete with accounts of sexual, emotional, physical and psychological trauma also.

All that said, I wonder if I may move beyond those wounded at the bottom of the proverbial cliff and pay attention to those at the cliff’s edge doing much of the pushing: The religious leaders. For the sake of ease, I’m going to use the term MINISTRY WORKERS to include pastors, ministers, religious teachers, clergy, associates, board members, ministry leaders, chaplains, small group leaders and others in authority over the spiritual wellbeing of those in the congregation.

If you’re reading me for the first time, understand that in many ways, I am a MINISTRY WORKER. Even by virtue of me writing this, I am assuming a place of authority based on knowledge, experience and various responsibilities/positions I hold and have held. So, I’m not standing at the sideline or bottom of the hill pointing the finger at the baddies. I’m kinda at the top of the cliff, albeit a little apprehensively, shouting ‘Hey! Be careful!’ terribly aware that I could push others off too.

The problem with the picture I’ve already drawn is that there are two parties. Those suffering with degrees of trauma at the bottom of the cliff, and those causing the suffering at the top. I have been wondering, for some time now, if this polarising view is part of the reason trauma continues to multiply. I seriously wonder if we could reduce religious trauma by paying attention to the suffering of many of the MINISTRY WORKERS.

Before you accuse me of having some kind of Stockholm Syndrome or of being insensitive to the ‘pushed’, I assure you, I’m not. God knows I have given much of my life to bringing healing to those at the bottom of the cliff and I’ll still advocate for their wellbeing and right for safety and agency. What I cannot deny however, is that healthy, compassionate, peace-filled people are less likely to cause intentional harm. I also cannot deny the complexity being a MINISTRY WORKER nowadays. I would suggest most MINISTRY WORKERS (and their families) are unsupported, under-resourced and undertrained for the work required of them. As a result, they are subject to many stressors. Is this an excuse for abuse? No way. Are these contributors to harmful action? I believe so and I believe complimentary research supports this.

I’ve listed this research summary before. It was gathered from church clergy by Trihub et al. (2010). Read it twice if you need to. Note the lack of mental health services accessed and the reasons why.

As you may know, I worked to support MINISTRY WORKERS for several years. I’ve walked alongside some who were stressed and overwhelmed to the point of ending their lives. I’ve travelled abroad to counsel and pray with MINISTRY WORKERS who, for the first time, had someone skilled and safe sit with them to unpack past traumas of abuse and neglect; dynamics that were seriously effecting the way they were treating themselves and others. I’m not a fan of sweeping statements when it comes to interpersonal dynamics, but for the large part, I believe this statement to be true in and outside of religion: “Leaders committed to wholeness, are more likely to lead others to wholeness.” If the opposite were also true, we might say: “Broken leaders are more likely to break others.” And let’s not assume all MINISTRY WORKERS aren’t suffering under degrees of trauma themselves, because many are. In some way, many MINISTRY WORKERS are at the bottom of one cliff, in pain, pushing others down to lower levels.

Can religious and church-based trauma be reduced? I believe it can. I won’t be eliminated. What I suggest here is by no means the entire solution because the doctrinal components should also be examined, but I think it could make a significant difference. I sincerely believe if MINISTRY WORKERS (and their family) undertook regular, mandatory, funded, professional external supervision that church-based trauma could be reduced. I also would advocate that MINISTRY WORKERS should undertake some kind of psychological evaluation/screening to determine suitability for various church-based roles. One only has to listen to a podcast like “The Rise and Fall of Mars Hill” or hang around some church communities long enough to see the tragic effects of narcissistic personality and other psychopathic disorders on a congregation. And yes, these disorders can be screened for and healing is possible – ironically it involves lots of therapy – something most people with these disorders cleverly avoid.

I sincerely believe if MINISTRY WORKERS (and their family) undertook regular, mandatory, funded, professional external supervision that church-based trauma could be reduced

I have discovered, since writing and advocating for the care and support of MINISTRY WORKERS’ mental health that a number of denominations and ministry groups in various countries have these services and safeguards described in place. Yet, many do not. Why? Well, that answer is complex but despite abuse related convictions and a trail of traumatised people, some groups simple don’t see the need. Some denominations regard therapy, even if done with Christian therapists, as non-scriptural, opting for in-house accountability models, which may work at times, but are found wanting when it comes to objectively addressing issues of mental health or victimisation -giving benefit to protect the movement/denomination instead of those victimised. Other denominational movements are organised through affiliation and legal oversight only, leaving Churches largely independent to decide the necessity of regular supervision. Sadly, most pastors, boards and elders don’t see the need – till it’s too late. This shouldn’t be. So many other front-line community care organisations have mandatory or EAP funded assistance available for their staff. Most social work and health practitioner-based associations require members to have ongoing supervision for personal and professional reasons – because they know (and research supports) it is beneficial for all workers and clients. Why not MINISTRY WORKERS?

Aside from pre-screening and regular supervision I think MINISTRY WORKERS also need to be aware of the complexities that are unique to them. Something I have spoken on at workshop and gatherings with pastors include the acknowledgement (and supported research) on complexities associated with CALLING, managing a COMPANY, the effect on their CLAN (family) and their work in the COMMUNITY. MINISTRY WORKERS and those embarking on a career in the church need to be aware of how abnormal their work is compared to working in other sectors. Can church work be rewarding? Absolutely. Does being a MINISTRY WORKER come with serious risk factors to themselves and others? Absolutely.

If you follow the news, you will have seen the increasing number of influential Christian leaders being held to account for the trail of abuse survivors they, and/or their affiliated ministry, have left behind. Would the suggested supervision have mitigated some of these instances? Possibly. You can be sure someone, one day, is going to be paying for therapy. Why should it only be the abuse survivors/victims? Why aren’t those at the top of the hill being made to check in with someone on how they are going?

Before I finish, I can hear some of my Christian brothers and sisters argue that all that is needed is a passionate loving relationship with God. Prayer. Time in scriptures. Good fellowship. Active discipleship. Accountability. That the disciples had Jesus and so do we. That the apostles didn’t have to go for supervision. That we have the Holy Spirit as counsellor. And for these reasons people like trained psychologists etc are unnecessary. I’d agree with those historic and biblical facts to a point. I’d even agree that these spiritual practices have brought wholeness, peace and mitigated more harm than we can fathom. But I can’t say that those practices are enough, particularly now. A quick look through history and current events tells us these practices alone are no panacea for church related trauma. I’d say this kind of spiritual bypassing of problems can cause harm -that the world is a different place with more complexities for MINISTRY WORKERS, than say, the Early Church. I’d also ask that if everything is OK with the MINISTRY WORKER, what is the harm of seeing a trained professional one hour every two months? Is it really too much to ask? I mean, do the maths. Full-time work is 40 hours per week x 8 weeks – 320 hours. I’m talking about less that .5% of their employment time! And if all is good, as I said to one pastor, at least you’ll pick up some good listening and counselling skills that you can use in your job! Let’s be honest, it’s really not that hard to implement and monitor, is it?

Who knows, we may even be able to reduce religious trauma and increase the wellbeing of the MINISTRY WORKERS and their families.

BTW. If you, or someone you know, wants some help making sense of these things, please check out my therapy services – perhaps I can help.